What is Fly Tipping?

If someone has dumped waste on your land without your permission, they have committed a criminal act. It is your responsibility to clear it though, and you must make sure you do so using the appropriate services. This article will explain what fly tipping is, the penalties it can incur, and how you can report it to keep your neighbourhood clean. 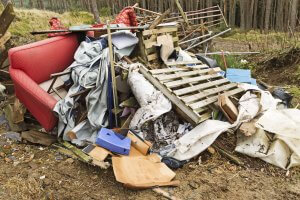 What is fly tipping?

Fly tipping is the unauthorised dumping of waste. It is officially defined as ‘the illegal deposit of any waste onto land that does not have license to accept it’.

Fly tipping can ruin the look and feel of a community. When items are dumped on the side of the road, it spurs other people to dump their waste in the same area without fear of repercussion, leading to a buildup. Not only does this make the area unsightly and hazardous, but it can also lead to a perception of high crime and reduced safety.

Unfortunately, fly tipping is all too common in the UK, with over 1,000,000 instances of fly tipping reported in the UK between 2018-2019. 22,184 of those were reported in Croydon alone — that’s the third highest rate of fly tipping across all London boroughs. As a result, Croydon council, along with Croydon businesses, have put protocols in place to combat fly tipping.

How to report fly tipping

Croydon council have set up a designated fly-tipping hotline for reporting the crime. This should be used if you see anyone fly tipping, even if it’s not on your property.

If the fly tipping has occurred on your property and you’d like it removed, you can get in contact with specialist fly tipping clearance businesses, such as Hinton’s Waste. Not only do we remove all manner of waste safely and efficiently, but we also ensure that it is recycled where possible. By contacting us, you can turn a hindrance to the environment into a help to the environment.

What happens if you get caught fly tipping?

Fly tipping is a criminal offence under the Environmental Protection Act 1990. If you are caught, you could receive a fine of up to £50,000 and a prison sentence of up to 5 years. You may also be deprived of the right to the vehicle used to commit the crime.

Why is it called fly tipping?

Fly tipping is a combination of the phrase ‘on the fly’, meaning to do something spontaneously, and the word ‘tip’, which means to dump something. Thus, ‘fly tipping’ was coined to describe an act of dumping something quickly and unlawfully.

Hinton’s Waste provides waste removal services to Croydon, Sutton and other London boroughs. Whether it’s private land or public streets, we will remove the waste quickly and dispose of it responsibly. With over a decade of experience in the industry, you can trust Hinton’s waste for all your waste removal needs. Contact us today to find out how we can help you.

← Can You Put a Mattress in a Skip? | Topsoil vs Compost: What Should You Use? →

By clicking "Accept All Cookies", you agree to the storing of cookies on your device to enhance site navigation, analyse site usage, assist in our marketing efforts, and for personalised advertising.